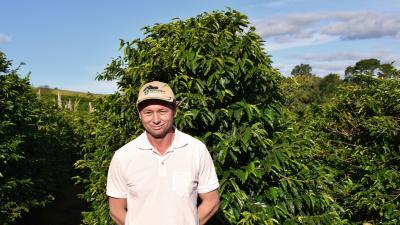 Sítio Três Barras belongs to Mr. Manassés family for at least 70 years, when his grandparent, José Caetano Dias, acquired a small lot in the region, having as main activity the potatoes and peppers cultivation. Besides the farm's main activity had been the potatoe cultivation, Mr. José had a special feeling for coffee plantation and in the 50s he planted around three thousend trees. In 2001 the family decided to bet on the coffee culture again in 2.8 hectares inherited, planting five thousend trees of yellow Icatu and 5 hundred trees of Tupy. In the first years, the coffee cultivation showed great productivity, which encouraged the family to proceed investing. The farm presents as main characteristics the high altitude and the fertile soil, where the fertilizer using is reduced. The topography allows a mechanized culture management. It also presents a low incidence of plagues ans deseases such as rust, "bicho mineiro" and coffee borer beetle, also known as "broca".

Mr. Manassés family seeks to invest in post harvesting improvements, with the expansion of patios and the construction of storage barns. In 2008, they associated to APROD, an association of Divinolândia's region which has producers of family agriculture as members, uniting their strength to overcome the production and market difficulties.